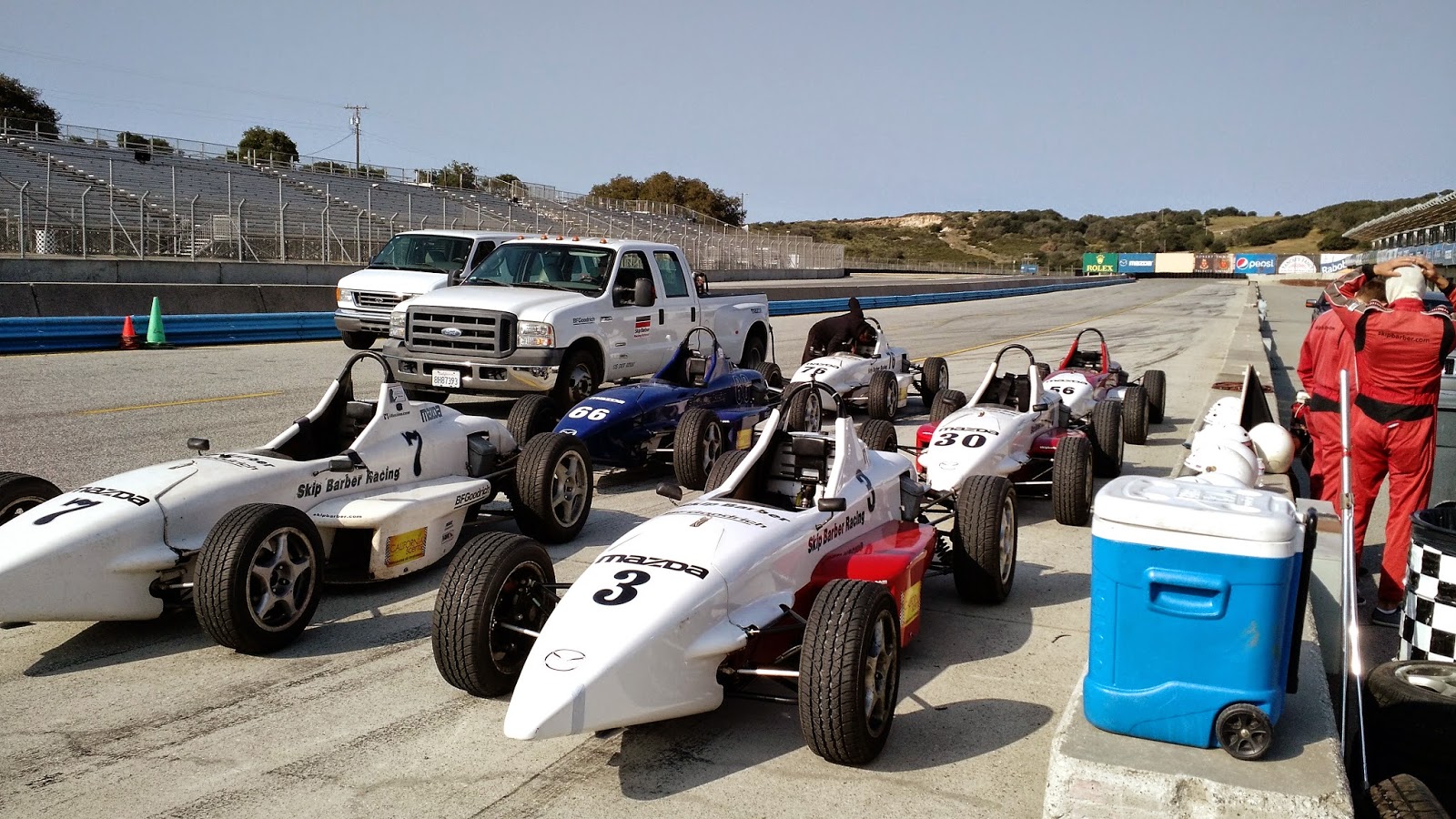 In my continuing quest to see if I am actually a car guy (or, if you prefer, car person), I did the half-day Skip Barber Racing School High Performance Driving and Racing Combo course at Laguna Seca raceway in Salinas. Basically, it's two hours of autocross and skid pad driving in "regular" cars, followed by two hours of track driving in purpose-built, open-wheel race cars.

TL;DR? It was fun, but too brief. If I had it to do again, I would have signed up for one of the full-day performance driving courses in regular cars (but Skip Barber Racing doesn't offer those at Laguna Seca). But the taste of race car driving did teach me that I'm not likely to be a track rat. I worry more about dying than going fast, which is all wrong for driving race cars.

Part One: Porsche 911 on autocross. After about a half hour of classroom time discussing the basics turn-in, corner apex, and track-out points for each corner ("connect-the-dots"). 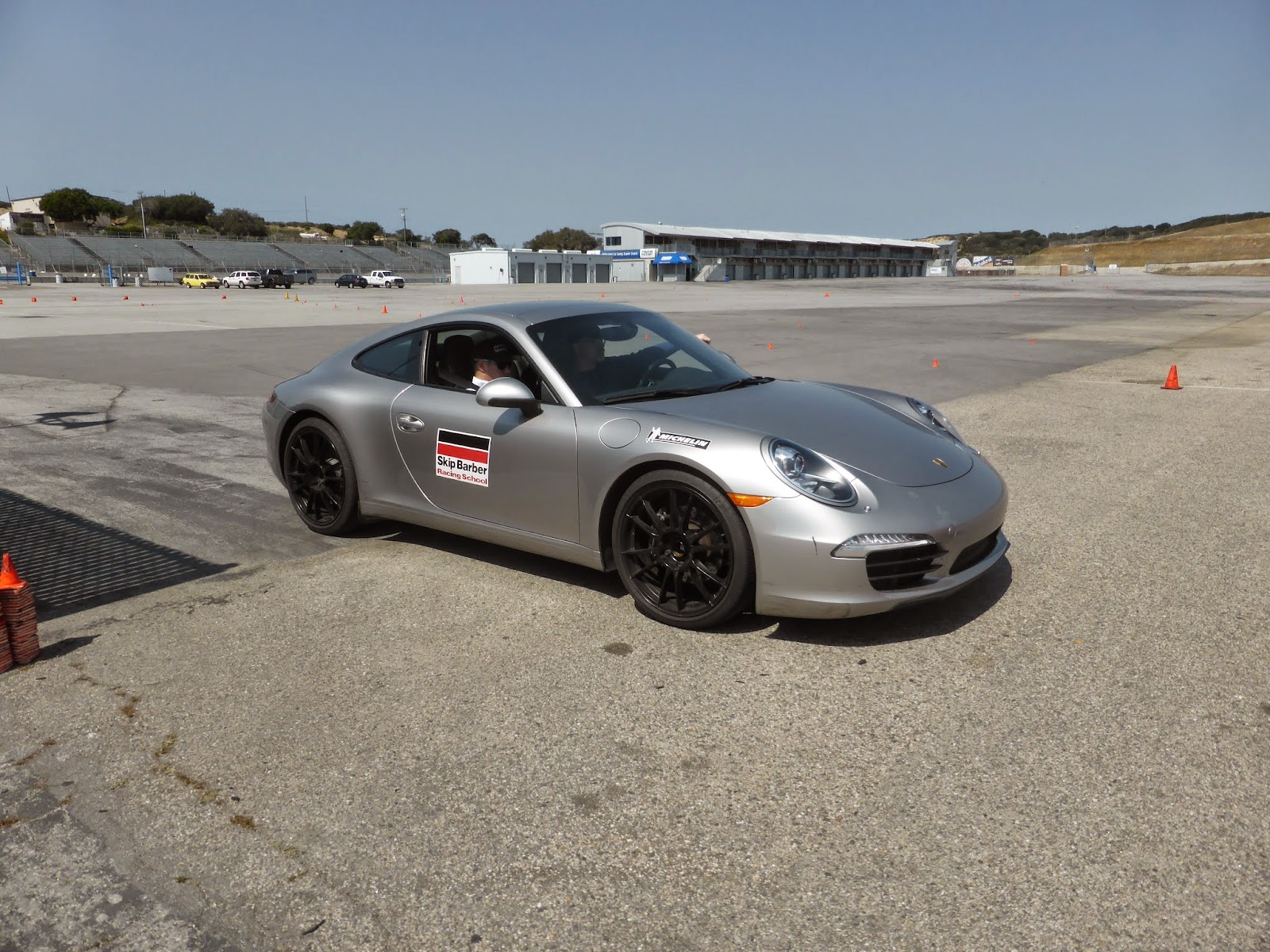 of driving dynamics, it was out to drive late-model 911 coupes on a small (~50 yards across) autocross circuit comprised of plastic cones. The basic idea was to learn to employ progressive braking and then to maintain speed through corners by paying attention to cones that mark

In addition to learning all those basic concepts, I also learned that the base model 911 is one hell of a car to drive hard around corners, even though we probably never went much past 35mph.

Part Two: Mazda Miata on skidpad. Next, more driving around plastic cones. This time, driving in
loops around two sets of cones. The catch? The rear tires of the Miatas (it's a rear-wheel-drive car, naturally) had "EasyDrift" covers on them, which reduce the traction to approximately nothing. So,
even at 15mph, as soon as you start turning, you're instantly in a skid, which means you get to practice your "correct, pause, recover" skills.

I, of course, had no such skills. I probably could have used another hour or two of practice to get the 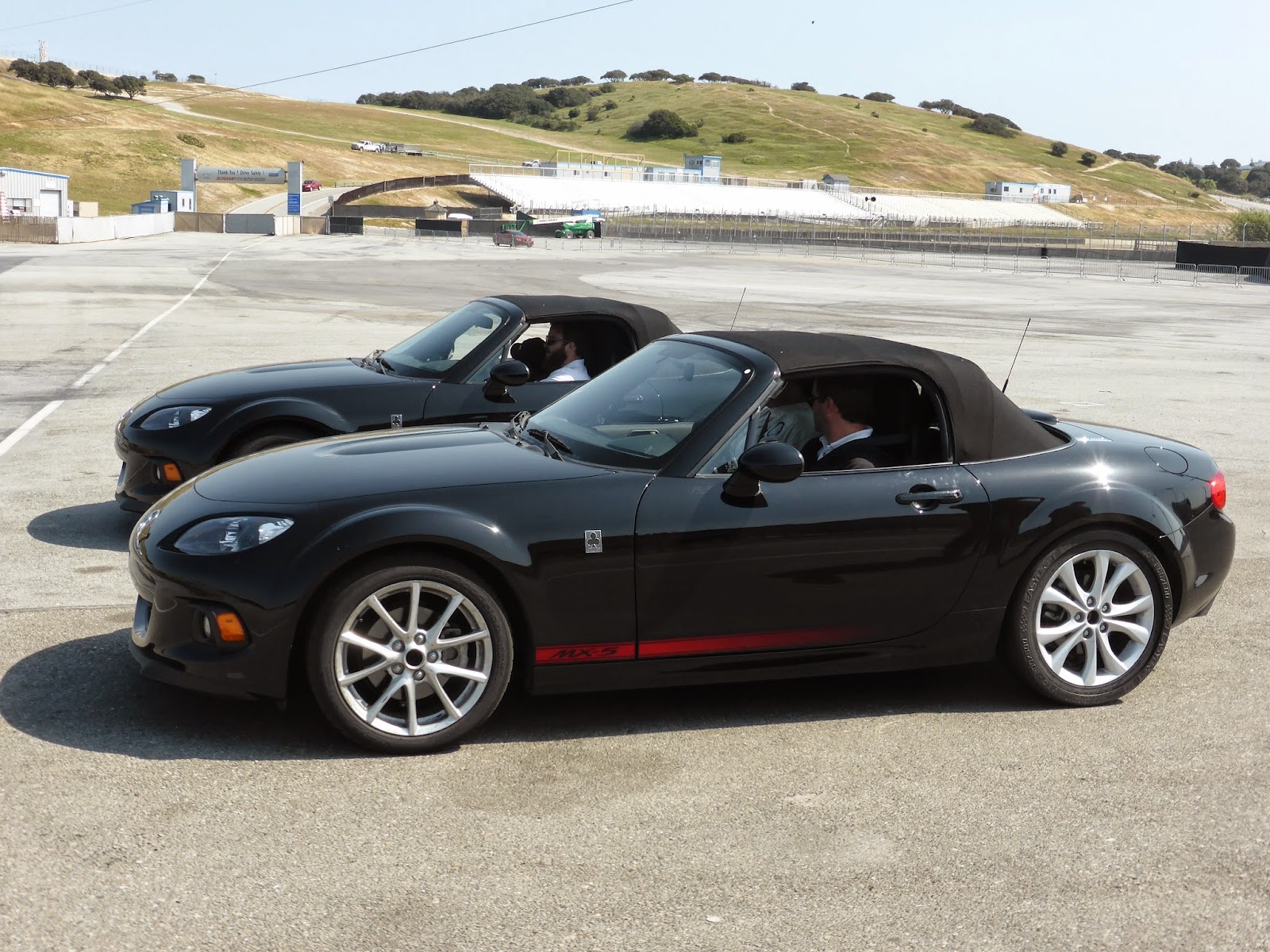 hang of it. Two lessons. First, EYES UP, EYES UP, EYES UP! Which is to say you have to put your eyes where you want the car to go, not where the car is going. Surprisingly hard to do in the moment, when instinct says to watch where you're heading, not where you wish you were heading. Second, FASTER HANDS! Once the rear starts breaking away, you really have a split second to turn into the skid. Miss it by even a hair, and you're done.

Like I said, I could have used more practice on this one. I have new respect for Ken Block, king of drifting.

Part Three: race cars on track. That's the picture at the top. I drove car #3. This is a purpose-built race car ("open wheel car" as they say in the trade, details here). It was LOUD, low, vibrated enough to dislodge bronchial phlegm, and raw. Driving position is basically reclined to near horizontal, strapped into 5-point restraints. Everything was "analog" in the extreme -- the steering wheel shakes, you feel the road, you have to push hard to get the pedals and shifter to do what you want. This is not anything like a regular "car." And Laguna Seca is a world-famous race track. So famous that even particular corners on the track are independently famous (search for "laguna seca corkscrew", for example). So it was a thrill to drive it.

I see why some people are addicted on the first drive. Not true for me. I think my problem is that I don't want to slide off the track more than I want to go fast. I think that's a good sign that I'm not made for racing and track days. I think I may be more of an "elbow on the sill, enjoying the weather" kind of driver.