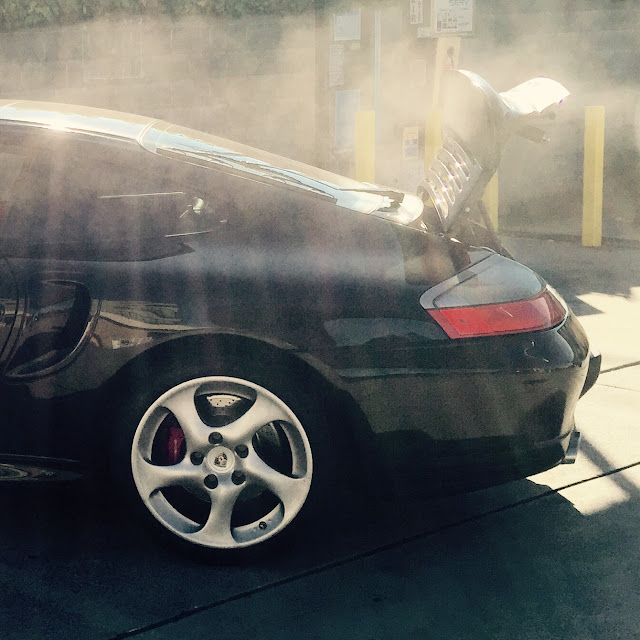 Well, the first broken thing was cheap and easy to fix. Not so much the second broken thing.

I happened to be driving my friend's Miata (as described here), as he was driving my 911 just ahead of me. Suddenly, there was a big cloud of white steam from the back of it, and a big wet slick on the pavement behind it.

You see, this vintage of the 911 turbo (aka 996tt) has a well-known design flaw: the coolant pipes. These pipes (there are 8 of them) carry coolant from the radiators (three of them, mounted up front) into the engine block (in the back). Hoses connect to the pipes, and the pipes connect to the cooling manifold. And that's the problem. In its infinite cost-saving wisdom, Porsche decided that the pipes would be glued into the manifold. Yes, rather than a mechanical bond, Porsche decided to couple two different metals, entrusted to survive multiple drastic temperature changes, with only a film of epoxy (see here).

Well, to Porsche's credit, this epoxy lasts for many years on most of these cars. Until it fails. In fact, it started happening so often that (1) there was a NHTSB investigation (closed for insufficient evidence) and (2) Porsche offered to fix this under warranty for up to 10 years after purchase.

So, what happens when the epoxy fails? Simply put, your car dumps all of its coolant on the road, all at once. Aside from being very dramatic, that can be a serious danger to cars behind you, since coolant is very slick. That's why many tracks have banned the 996tt unless either cooled by water, or fixed by having the coolant pipes pinned or welded into the coolant manifold.

As they say, there's good news and bad news. The good news is that (1) failure of a coolant pipe doesn't harm the engine (unlike the infamous IMS bearing failure on non-turbo 911s) and (2) there is a proven, one-time fix that solves the problem. That fix is to introduce a proper mechanical bond between the pipes and the manifold. This can either be putting a pin through the pipe and manifold, or it can be welding the pipes into the manifold. It's a bit of a religious question, which you prefer, but either seems to be adequate to the task.

The bad news is that the repair requires a full-engine removal. That's an expensive ($3,000+) proposition and not really something that lends itself to a wrench-at-home operation.

So I had the repair done by Sharkwerks, one of the best-known Porsche shops in the country, and one of the first to identify and develop a fix for the coolant pipe issue on these cars.

When you do the repair, you pin (or weld) all the pipes -- no point in doing only the one that failed, when any of the others might go at any time. And, while the engine is out, there's a bunch of other maintenance that you may as well do. In my case, I replaced the hoses, the aging plastic bits (coolant expansion tank), the spark plugs, and the water pump. All recommended maintenance for a car around the age of mine. Doing the plugs now also takes care of the most expensive part of the 60,000 mile major service, which is probably a year or two away for my car.

And I figured that while Sharkwerks was in there, I may as well make some tasteful improvements. In this case, a "Stage 1" tune, which is basically the mildest of the tuning packages Sharkwerks does (see here for the gallery of builds they've done on 996tt cars). This entails two thing: first, a reprogram of the ECU (electronic control unit) with the EVOMSit software-only package, which unlocks about 50 additional horsepower from the stock motor and exhaust; and second, replacing the stock diverters with the EVOMS billet diverters.

Oh, and one final thing: I swapped the aftermarket exhaust that came with the car when I bought it back to a factory exhaust.  The aftermarket exhaust that came on the car (never did figure out which one it was, but best guess is a single-cannister Fabspeed or Tubi) had a tendency to drone at highway speeds, and the move back to factory is an improvement for someone who cares more about comfort inside the car while driving, rather than impressing people in the parking lot.

All in all, it was a good investment in both necessary and preventative maintenance, as well as upgrade. Total cost = $8k (about $2,500 of which was for my improvements, as opposed to repair/maintenance).