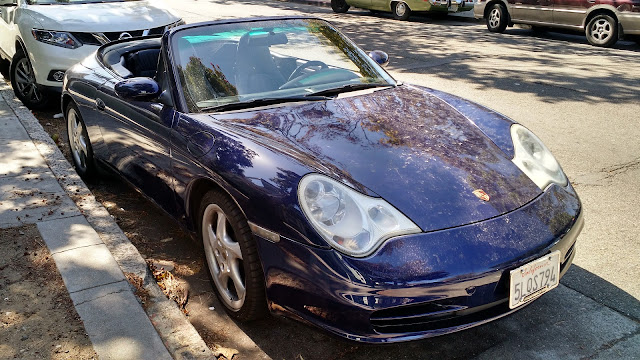 Although my 2002 911 Turbo is among the least desirable of the 911s, the non-turbo versions are the real "black sheep" of the 911 family. Porsche snobs hate the headlights (same as on the Turbo), the interior (same as the Turbo), and the water cooling (same as the Turbo). With somewhat more justification, they also carp about the rear main seal (RMS), which tends to leak, and the intermediate shaft (IMS) bearing, which can fail and destroy your engine at any moment (which is NOT the same on the Turbo, which has a different engine).

But after a week in this car, I call nonsense on all that. Because this car is great. I mean it. If I were interested in long-term owning a 911, I would choose this over my Turbo. This comparison is an object lesson in how "too much car" can be less than "just the right amount of car."

So how is this car different from mine? Well, obviously it's a convertible. And that turns out to be a pretty big deal, especially on a nice day. And it's not too windy in the cabin, even at 70 mph on the highway. I wouldn't want to spend hours that way, but it's perfectly delightful for a half hour commute on the freeway (which is more than I can say for the original Miata).

The engine, of course, is not turbocharged (in car lingo, this means it's "naturally aspirated"). It's also a completely a different design. In the 996tt, the engine is descended from the Mezger engines used in Porsche race cars, putting out 415hp. In the regular 996, it was a newly developed engine, putting out 296-320 horsepower depending on the model year. Most (in)famously, the 996 engine featured an IMS bearing that has a propensity to fail for lack of lubrication, necessitating an engine transplant. It's not clear how often this failure actually occurs (some estimate that it's as low as 1% of these cars), but the anxiety about it has ruthlessly driven down prices on the 996-era cars (even the Turbos, which don't have this problem). The good news is that (1) the IMS-bearing can be fixed with after-market bearing assemblies and (2) this means that solid 911s in model years 1999-2004 can be had for ~$20k.

The car I had for the week was the "Carrera 4" version, which means that it's all-wheel-drive, like my Turbo. This adds some weight when compared to the rear-wheel-drive versions ("C2"), but with all the engine weight hanging off the back end of the car, I personally feel safer knowing that the front wheels can pull me out if I lose the back end in a skid (thanks to Porsche's PSM traction control system).

What else makes this car better for daily life than my Turbo? Well, it rides a bit higher, on a softer suspension, which makes it easier on city streets. The clutch has more feel than the hydraulically augmented clutch in my Turbo, making it easier for hill starts and stop-and-go traffic. And the engine revs more freely to the redline and with a more delightful engine note (in a Turbo, the engine note is a bit obscured by having to get through the two turbochargers before reaching the outside air). It turns out the 315hp offered is more than good enough at reasonable speeds, even if it does lack the remarkable torque of the Turbo (especially in 5th and 6th gear). Overall the car feels lighter and smaller than the Turbo (more "tossable" in car lingo).  The visibility with the top down is, of course, without compare.

After a week of traded cars, the two of us agreed: all-in-all, for regular daily driving, the non-Turbo convertible is more fun and easier to live with than the Turbo. That said, on the open road, at speeds over 90mph, it's a different story...

UPDATE: Here's a great article explaining why this generation of the 911 is a performance car bargain. Of course, now that people are saying that, the prices will start going up!
swaps