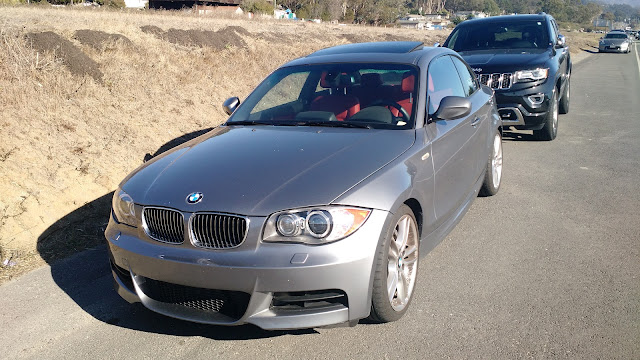 This was an enlightening swap. Short summary: BMW created the "sports sedan" category, and this is a great exemplar that reminded me more than a little of my dad's 1972 BMW 2002tii. Excellent all-around transportation, plus fast, sporty, and fun. But it's not as fast and sporty as the 911 Turbo.

But the driving experience is totally different.

The BMW is a sports sedan. Which means the car rides higher, the seating position is higher, the overall experience is "regular car, but better, faster, nicer, more fun." Great handling, great motor that revs freely and sounds great, good 6 speed gearbox, plenty of power ... but it's still a sedan, rather than a full-fledged sports car.

Don't get me wrong, I really liked it. Really. I immediately thought of several city-dwelling friends for whom this would be the perfect car. And unlike so many soul-less sedans churned out by the millions, this one is really, really fun to drive. Putting significant power (302hp) in a smaller, rear-wheel drive car is a good idea.

Here are the reasons why both enthusiasts and regular people should like this car:
What didn't I like? Well, I thought the brakes were a bit grabby. And I know reviewers complain about understeer in aggressive cornering (I didn't try any of that). And while the gearbox was very smooth, I would have liked a bit more of a notchy and mechanical feel, as well as slightly shorter throws. But this is all nit-picking. It's a great car. Get one, before they start becoming collectible as the last BMWs with real soul. (If it were me, I would get a convertible, in white, with red Boston leather interior. Because California.)

What about my 911 Turbo? Well, here's how I would sum it up. The 135i is a great sports sedan and a damn fine car for the real world. But the 911 Turbo is a real sports car. You sit lower, you feel bonded to the road, you have an ungodly amount of power ("face melting" is how Jennifer describes it), and you have a much richer engine note (coming from behind you!). Where the 135i is the top end of sports sedan, the 911 Turbo is the bottom end of supercar.

In short, driving the 911 Turbo is more of an occasion than the 135i, at least in my book.