Why? Well, first, I think the "C2" Corvette (1963-1967) is perhaps the most beautiful American car ever mass produced. Second, it's utterly different from the last car: American, naturally-aspirated 327 cu. in. (that's 5.3 liters) V8 engine in front, over 50 years old, made of fiberglass. It also meets my other criteria -- it's not losing value (probably gaining value!), parts and service are easy to find, and there's a great community behind it. 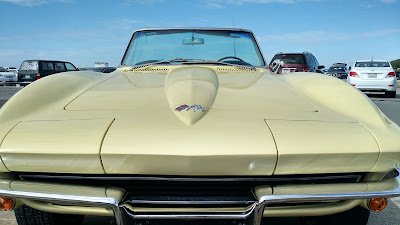 Why this Corvette? Well, 1965 is a good year for these so-called "midyear" Corvettes, as it's not as collectible (and hence cheaper) than the first and last years, while also being the first year that offered disc brakes on all four wheels. I love the "goldwood" yellow color, which is less common than the blue, red, and black. This one has the up-rated "L79" version of the standard 327 cu. in. engine, which was rated at 350hp from the factory (that's a 50hp bump over the base model). And it's an "older restoration" -- which means it's fully restored but no longer fetching absolute top collector dollar. In other words, it's for driving, not for polishing on a concours dais. It's largely "correct", but not "all original". For example, the interior was originally black, but now is white. And the wheels are American Racing Torque Thrust Ds, not the original wheels that came with the car (or the "knock off" wheels that are most famous on these C2 Corvettes). And while I actually would have preferred it without the "side pipe" exhaust, this was very nearly exactly the car I was looking for.

First impressions? It's LOUD. And it's completely different from driving the 37 years younger Porsche.
C2