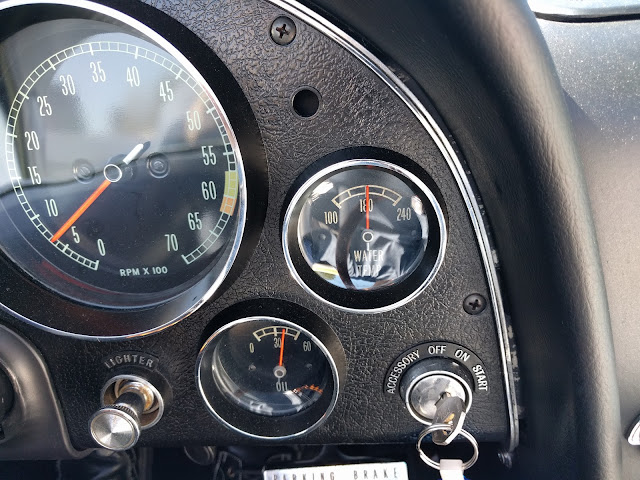 These mid-60s Corvettes tend to overheat. There's a whole FAQ about the subject on the Corvette Forum. Ideally, the coolant temperature would be stable around 180 degrees. That's the temp at which the thermostat opens up and the coolant flows through the radiator (under 180 degrees, you don't want the coolant to flow, because you want the engine to warm up to 180 degrees, which is the intended operating temperature). As the temperature rises, the radiator fan kicks in to boost cooling. And thanks to a fan clutch, the fan speeds up as the engine heats up. It's a pretty simple, all analog system. It was built in 1965, after all.

So here's what was happening with mine: under regular highway driving conditions, the temperature was a stable 180 degrees. But if, after highway driving, you were trapped in traffic, with the engine idling, it would overheat. After some testing and deduction, it was clear to me that the problem was not the thermostat (if it were, it would overheat all the time) or the water pump (same) or the hoses collapsing (same). After some more diagnosing with an infrared thermometer, I narrowed things down to the fan clutch (not enough air being drawn over the radiator at stand still) or perhaps the radiator (enough cooling capacity with lots of airflow, but not enough otherwise). There was also a question of whether it might be related to the distributor (and here we enter the decidedly analog world of mechanical and vacuum distributor advances).

Now out of my depth, I called in the experts at Precision Motive. After replacing the fan clutch, fixing the vacuum advance, and adjusting the distributor timing, the overheating problem is under control, with the engine running around 180 nearly all the time. After a long idle at standstill, it still gets up to about 195, but it's stable there, and there's no harm to the engine at that temperature.

While it was in the shop, I also them replace the ignition coil (one terminal was stripped), change the oil, lubricate the chassis, and adjust the driver's side hood latch. Total cost = ~$900.