After fixing the radio in the Corvette, it was time to tackle the clock. We tried mightily to revive the patient, but in the end, a heart transplant was necessary.

The clocks in the "midyear" Corvettes (1963-67) are electro-mechanical units made by Borg Instruments. They were used in a bunch of other GM cars of the period, in addition to the Corvette. This article gives a nice description of the clock and what commonly goes wrong with it.

These are analog, spring-wound clocks with an electric winder that is supposed to reset the spring mechanism every 3 minutes or so. To see how it's supposed to work, check out this video (currently at 460 views, many of which are from me!). The design doesn't exactly inspire confidence, as it depends on a set of 12 volt contact points reliably closing every 3 minutes or so, pretty much forever. Those contact points build up corrosion over time, which will kill the rewinding mechanism. 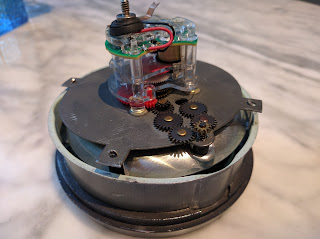 Thanks to a bunch of threads on the Corvette Forum, I had a pretty easy time getting the clock out of the dash, which requires removing the glove box and side panels from the center console. After pulling the clock from the dash and opening it, things looked promising, since everything looked intact and functional.

After a bit of contact cleaning (sandpaper + DeOxit) and lubricating (use a light clock oil, and sparingly), we got it working again. Unfortunately, the "kick" that is supposed to rewind the mechanism was quite weak, giving us at best 15 seconds between closing of the contacts. I assume this means that the coil driving the solenoid had deteriorated. Getting replacement parts and further disassembling the clock movement was beyond our technical abilities.

At this point, there were two choices. First, we could send the original Borg movement to a specialist for restoration, which would run about $100. Second, we could buy a quartz conversion kit for roughly the same cost, which would replace the analog guts with a modern quartz movement. The quartz conversion runs more reliably, is less of a parasitic drain on the battery, and keeps better time. So that's what we chose. (The downside to the quartz conversion is that you'll be penalized for it in NCRS judging for originality, if you're into that kind of thing.)