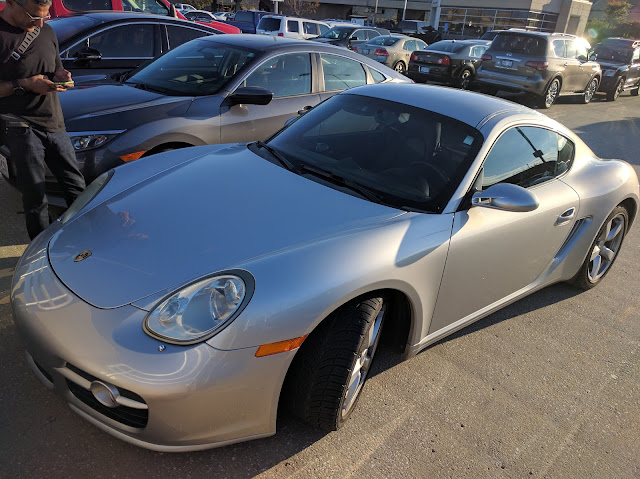 During a weekend visit to Kansas City (to eat BBQ, where Joe's was the stand-out favorite), I decided to try out Turo, which is most easily described as "Airbnb for cars." As it happens, one of the options was Aaron's 2006 Porsche Cayman S. At $69/day (sometimes it's as low as $54/day), it was easy to choose this over a generic rental car!

The 2006 Cayman S was the second generation of the Boxster/Cayman platform, known as the "987" to the Porsche cognoscenti (Wikipedia details here). It has a 3.4l six cylinder engine, mounted behind the driver/passenger and ahead of the rear wheels ("mid-engined"), mated to a 6 speed manual, and putting down 291 horsepower through the rear wheels. New, these were over $70k. Today, you can buy these in good condition for $20k-22k.

So how was it? Pretty great, actually. The overall experience reminded me a lot of my 911 Turbo (but without the face-melting power). It is very well-planted, inspires confidence, and never feels hard to control. It feels like engineers really cared and wanted this to feel like a real Porsche. The hydraulic steering feels great, with just the right mix of weight and feedback. Turning, the car feels like it is pivoting from the center, which is fantastic (in the 911, you feel the weight hanging off the back). The naturally aspirated engine revs freely and sounds good (without being obnoxious). The suspension was on the stiff side, but not punishing (unlike my 911 Turbo), and I didn't have to worry about scraping the front on every driveway. All in all, really great balance of performance and live-ability (again, like a 911).

But it's no match for my old Porsche in the power department. The power is adequate (compared to my old NA Miata) but falls a bit short of what you'd ideally like to have on tap. And to get the power, you have to wring the engine out (above 4k rpm, the reviewers say, though I didn't have many opportunities push it on the streets of KC).

The real problem for this car is that you can get a 911 of similar vintage (1999-2005, the 996 generation) for basically the same price. I'd probably go for the 911, but this is smaller, more nimble, and probably better handling.
swaps