February 27, 2018
I've been remiss in keeping this up-to-date with the various interesting cars I've managed to rent while on short trips.

2018 Ford Mustang Convertible
This one I rented from National Car Rental for a weekend in Sarasota, Florida. As befits a rental fleet car, this featured the 4-cylinder Ecoboost turbo engine, not the mighty V8 that makes the big noise and scares people at cars & coffee. But it did have the "premium" options package.

Here's what I had to say about it: "I was amazed how much I liked it. Very quiet for a convertible with the top up, reasonably fast and responsive (in Sport+ mode), good visibility, interior both nice and roomy, competent entertainment system (Ford Sync) that actually sounded good, good sized trunk. I liked driving it a lot more than the new Audi A4. It's a bit big for city parking, but I never thought I would hear myself say "I could be totally happy with a Mustang as my daily driver." (Though I would want the V8 with a stick, I'm betting these 4cyl automatics will get cheap much faster.) Recommended!"

On further reflection, I don't actually feel like I want the V8. With the turbo 4 cylinder (310 horsepower, 350 ft-lbs of torque!), I think this car is plenty special just as it is. Our favorite feature was the "pony projection lights" that puts a ghostly prancing pony logo on the ground at night next to the doors! 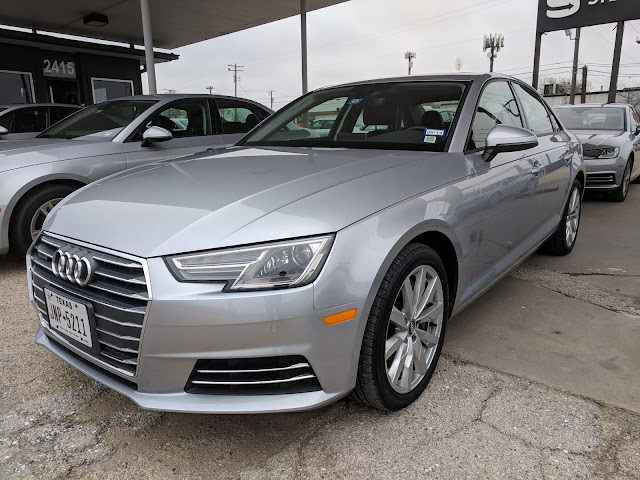 Had this for about 4 hours in Austin, during a brief stop on a year-end mileage run for BBQ, rented through SilverCar. While I thought SilverCar was great, I thought the A4 was pretty forgettable. The interior was nice, the ride was fine, but nothing that you probably couldn't manage equally well in a cheaper marque. A bit underpowered, too. Not at all bad, mind you, just nothing special. 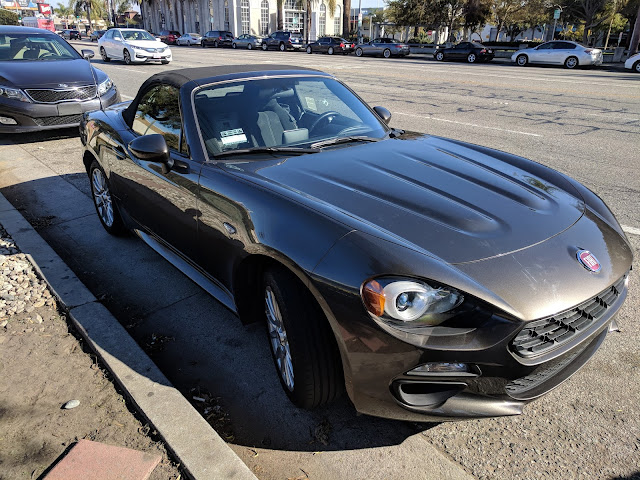 On a weekend in Los Angeles, I used Turo to try the so-called Fiata (so named because it's essentially a Miata with a different body and motor, even built in the Miata plant in Hiroshima). Unfortunately, I didn't get to drive it that much, other than in city traffic, so it didn't really get a fair chance. I liked the eager little turbo motor, which provided some nice oomph in the 3-4,000 rpm range. As some reviewers have noted, the control knob for the nav/entertainment system is right under your wrist when you shift, sometimes resulting in unintended presses. Wind noise is less than I remember from my 1997 (NA) Miata, which is nice. All in all, I probably didn't have enough of an experience to judge. But on looks, I still prefer the current (ND) Miata, which is the same chassis, but with a non-turbo engine. I still need to find a way to spend a weekend with one of those...
swaps