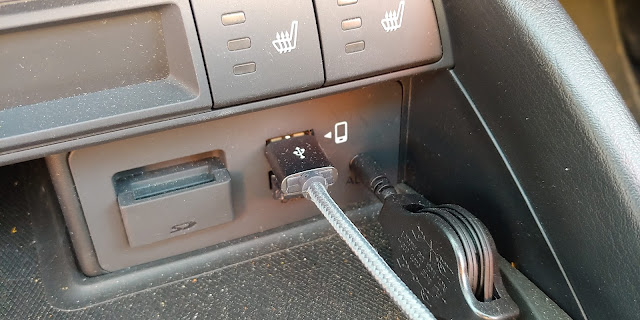 No car is perfect when delivered, at least not for every owner. Besides, when a car is new, you can't fuss over maintenance, so you fuss over "improvements." At least I do.

This one was utterly crucial. In fact, I delayed buying the ND Miata until I was sure it either came with Android Auto or would be retrofittable. Who wants to live with auto company navs in a world with Google Maps? And who wants to perch your phone in a clamp on your dash when there's already a big color screen there?

In November 2018, Mazda confirmed that all models from 2014 would be upgradeable. Soon after, they starting shipping the retrofit kits, and the wonderful Miata.net forums provided lots of advice on self-installing. The install took about three hours, all in, and now I've got Android Auto up and running, delivering Spotify, Pocket Casts, and Google Maps. Not to mention Google Assistant, which is more versatile than the Mazda voice recognition system.

Mostly, it's been a great upgrade. For Google Maps, alone, it was worth it. The remaining annoyances are generic to car entertainment systems, rather than a beef about Mazda's Android Auto implementation. For example, it's still much too hard to queue up an album without lots of scrolling around (which you don't want to do while driving). "Play the new James Blake album," for example, appears to be beyond the ability of Google Assistant/AndroidAuto/Spotify. Sigh. Maybe someday.

A purely aesthetic "upgrade," replacing the tall, somewhat cheap-looking OEM plastic one. Perhaps functional to the extent it reduces the risk of damage at the car wash (only touchless, of course!). There are some rumors that using the stubby antenna reduces tuner sensitivity a little bit, but given my mostly urban existence (and the fact that I almost never listen to the radio), it's not something that stopped me.

Like many olds, I'm a bit of a purist about my engine noise (and I actually don't need lots of it). I don't see the charm in "fake" engine noise, whether piped in through a "sound tube" (the ND Miata way) or synthesized through the speakers (BMW, I'm looking at you). It's particularly galling when the sound tube is only in the manual transmission cars. Come on. It's a small convertible. Either the engine sounds right (see, e.g., NA Miata), or it doesn't.

So far, after the sound tube delete, I'm actually not noticing much of a difference. It doesn't change the overall volume of engine noise very much, but rather changes the character a bit. It only took about 30 minutes to remove the sound tube and replace it with genuine Miata parts (the same ones that all the automatic ND Miatas have from the factory). Instructions here. Easily reversible, too, so I'm keeping the parts in case a future owner wants them.
ND