April 18, 2019
Why not turn the trip to Coachella into a first-rate road trip? OK, done. 1230 miles later, I can attest that California's backroads are spectacularly beautiful in springtime. Words fail me in describing these breathtaking landscapes.

Fortunately, however, I can find the words to describe the best roads I found.

Day One: SF to Santa Maria 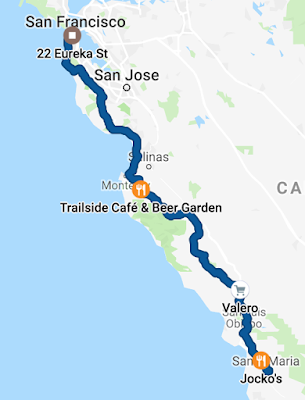 I started the trip by taking Highway 1 to Half Moon Bay, then climbing up to Skyline Drive for the classic drive past Alice's Restaurant and Windy Hill, then dropping down on 9 to Santa Cruz. This is a familiar route to any Bay Area driving enthusiast. The weather was perfect and the midweek traffic was light. As usual 9 is a blast, with lots of dappled shade and tight corners descending from the mountains.
From Santa Cruz, I was on the relatively boring stretch of 1 to Seaside, then opted to take 68 (Monterey-Salinas Highway) to Laureles Grade Road (G20), hoping that it would be an interesting twisty backroad to Carmel Valley. Nope. Boring route, with lots of suburban traffic. After lunch in the quaint wine tourist town of Carmel Valley, however, I experienced motoring nirvana. East Carmel Valley Road (G16) from Carmel Valley to Arroyo Seco Road is perhaps the best road I've ever driven. Hilly ranchland provides gorgeous scenery, while the road provides a little of everything. Fast sweeping corners? Check. Tight switchbacks? Check. Deserted straightaways where you can see the total absence of traffic ahead? Check. From there, the stretch of Arroyo Seco Road to Greenfield (still G20), followed by a left onto the straight, deserted, agricultural Central Avenue, took me to 101 South for just a few miles.
Never again will I take 101 all the way to Paso Robles. There is a better way. Hop off 101 at Jolon Road (G14), just outside King City. This quiet backroad runs up into the Fort Hunter Liggett Military Reservation. The scenery is lovely, with willows, meadows, oaks all spread out in classic California fashion. I followed G14 down through Bee Rock (passing the pretty tempting Bee Rock Homestead), past Lake Nacimiento, and into Paso Robles.
Next, a boring stretch of 101 South to San Luis Obispo, then a brief but pleasant detour on 227 to Arroyo Grande before rejoining 101 South to Nipomo for dinner at Jocko's Steakhouse, then to my AirBnB in Santa Maria for the night.

Overall, 310 lovely miles in 5 hours of driving (excluding the lunch and dinner breaks).

I started the morning off with a lovely stack of pancakes, courtesy of my AirBnB host. Then a short stretch on 101 North to find the Cuyama Highway (168) headed east, which offered another lovely stretch of highway through hilly ranchlands, with lots of fast, sweeping curves. The occasional slow truck was the only thing to mar the drive.

Then I turned left on Maricopa Highway (33), which runs down to Ojai. The highway gets interesting once you leave Ventucopa, when it climbs up into the Los Padres National Forest, then back down to Ojai. This is a much nicer way to get to LA than the 101 to the west or the 5 to the east.
The final driving stretches from Ojai to LA offered nothing worth mentioning, from a driving POV. Just lots of freeway traffic. In total, 203 miles over 4 hours. 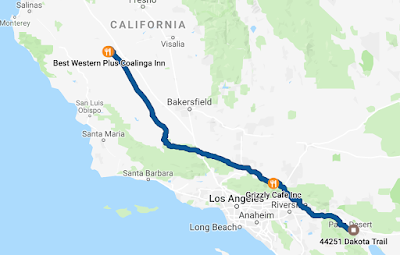 On the way home from Coachella, I managed to avoid repeating nearly any of the roads I took on the way down. Things were all typical LA-area freeway traffic for the first couple of hours (why does it take 2+ hours to get to any really fun driving roads?), until I climbed out of the low desert into the high desert north of San Bernadino. Exiting the 15 North at Cajon Junction, I thought I would opt for the Antelope Highway (138). But my error became pretty obvious, since 138 appears to be a major truck route into the Antelope Valley. Fortunately, the atlas suggested nearly parallel option: Highway 2 up to the ski resort town of Big Pines, then N4 down to Valyermo, then onward on N6 to rejoin 138 briefly in Palmdale. From Palmdale, I opted for the N2 (Elizabeth Lake Road to Pine Canyon Road) to 138 right before it joins the 5 North (here, I should have stayed on Gorman Post Road, and thereby skipped the 5 altogether).
Right before reaching Lebec, I exited to take the epic highway from Frazier Park to 33. This started as something as an anticlimax, with the presence of other cars impeding fun all along Cuddy Valley Road. But once I left the houses behind on Mil Potrero Highway, things not only got better, they got magical. Amazing high desert scenery? Check. No other cars? Check. Hills and sweeping curves and clean pavement? Check. And (unlike nearly all my other roads) beautifully banked curves. Yes, the engineers banked the curves, so you could take them faster. God bless them. Since this is empty land, the only things I had to be careful for were the squirrels and pheasants running across two lanes of asphalt.
Rejoining 33, I made my way up through California's oil country, passing through Maricopa, Taft, McKittrick, Avenal, and ending in Coalinga (apparently named after its original designation, Coaling Station A) for the night. Turns out there's a relatively new Best Western there, which is one of the few nice accommodations this far off the major highways. This stretch of 33 was almost entirely flat and straight. The most interesting things about it was the nearly endless forests of pumping horses, pipelines, and oil storage facilities along the way. I didn't know California had this much oil production. 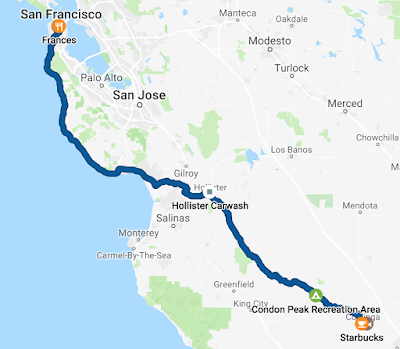 Having heard about "Airline Highway" (25) for years, I decided to make that my goal for the final day of driving. I could have done the obvious thing and opted for 198 West out of Coalinga, which intersects Airline Highway. But I quickly grew worried that trucks also like to take 198 out of Coalinga to the west.

So I consulted the atlas and decided to try the road less travelled, Los Gatos Road. It winds through the hills to meet Airline Highway near Bitterwater. This turned out to be a mixed bag. From Coalinga to Condon Peak Recreation Area (a lovely campground run by BLM, and nearly deserted), Los Gatos Road provided another magical driving experience, with the highway diving in and around idyllic hillside ranch lands. I think I was the only car heading my direction that I saw during the entire drive. In a word, fantastic.

But then beyond Condon Peak Recreation Area, where the road changes its name to Coalinga Road, things change drastically, with the road narrowing, giving up any markings (no yellow center lines here, folks), and suddenly offering potholes by the dozens. The scenery remained gorgeous, with one ranch after another appearing in valley meadows surrounded by tree-covered slopes (seriously, check out the Google Streetview images). But my average speed dropped to about 25 mph. I'm sure that a few weeks earlier, when the rains were heavy, the road would have been washed out at multiple points. Anyhow, while scenic and interesting, it wasn't exactly made for easy driving.
Coalinga Road ends into Airline Highway (25) just north of Bitterwater. Airline Highway earns its reputation, offering a lovely drive through more spectacular hilly California ranchlands. The pavement is immaculate, the curves are fast and frequent, and the traffic nearly nonexistent. This highway runs past Pinnacles National Park, and I highly recommend opting for it over 101 to the west if you want to visit the park. I stayed on Airline Highway until Hollister (cheapest gas of the whole trip: $3.83 for premium), then headed west toward the coast on 156, 101, and 129, intersecting Highway 1 in Watsonville. From there it was Highway 1 all the way to San Francisco.
Final day stats: 214 miles in 4.5 hours. 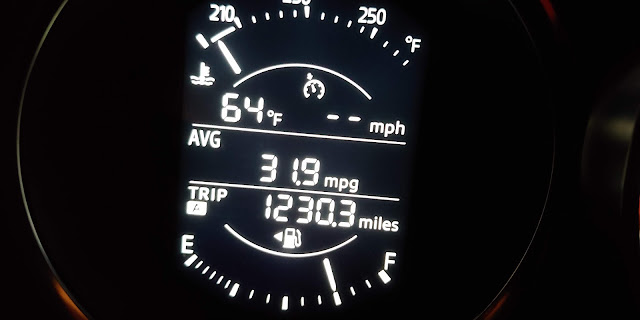