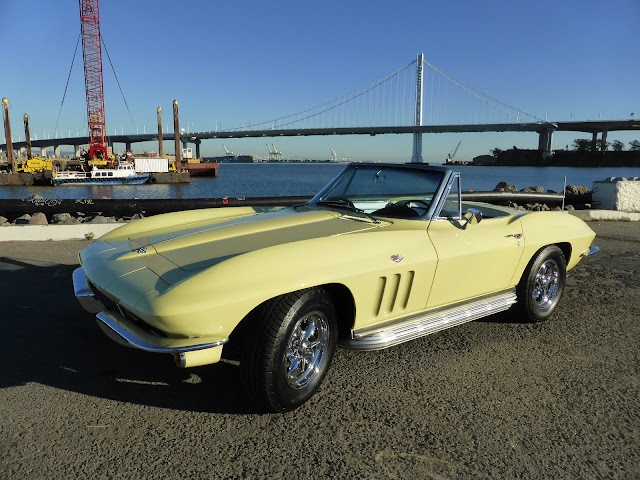 Time to sum up my 3 years with a 1965 Corvette convertible.

Well, for starters, it was very different from the modern-era Porsche 911 Turbo that it replaced. From a pure performance point of view, it was no contest -- the Porsche is a modern almost-supercar, while the Corvette is an antique. But driving is not all about performance. In fact, maybe it's not even mostly about performance. Because driving the Corvette was always an occasion. Take it out, fire up that (very loud) V8, inhale that 60s American engines-gasoline-and-oil scent -- well, it was never just driving. It was an event. Neither the Porsche nor the new Miata have that. Hell, no car I've ever driven before had the sense of occasion and curb presence delivered by this one.

The other major impression that I'm left with: the Corvette is, and always has been, America's blue collar dream car. Wherever I took it, people (usually men) would chat with me, explaining that a grandfather or uncle or brother owned one like it. And these people weren't lawyers, doctors, and engineers. These were working class people. Owning a Corvette is something blue collar people can aspire to (and many attain). They don't aspire to own Porsches or BMWs or Teslas. They want a Corvette. It's still the American Dream supercar (the current, 7th generation Corvette is, by all accounts, a screaming bargain as performance cars go).

There were some downsides, however. First, the smell. After parking it in my garage (which is directly below my living space), the whole house would smell like gasoline and exhaust for 12 hours or so. That can't be good for you. Second, it's sometimes tiresome to have a car that can't go out in the rain. Even in California. Third, there is the general anxiety that goes with driving a 50+ year-old car. Is it overheating? Is that noise new? Should I worry about it? Is it burning too much oil? Not enough oil? Did I remember to turn all the radio knobs to stave off corrosion? What's that rattle? Granted, some of this anxiety is about my own personality, but you should be the worrying sort if you want to own and maintain a machine over a half-century old, no? I wished that I lived closer to my (fantastic) Corvette-expert mechanic (oh, and you really, really want to have an expert mechanic to tend to your C2 Corvette -- there are just too many things that only lived experience can teach).

What will I miss most? The engine note while cruising top-down at 60 miles-per-hour. That sound reminded me of the sound of the single-engine planes my father took me up in when I was a kid. And, for lack of a better description, it sounded like American motoring. You just won't get that sound from a modern car. It's not coming back around.

All in all, it was an honor and privilege to be the custodian of this machine for a while. I'm proud to have left it better than I found it. And I hope the new owner enjoys it even more than I did.