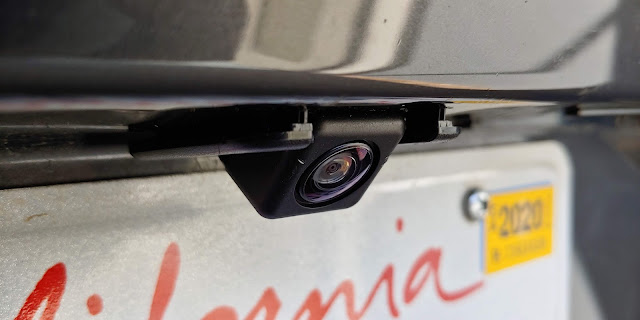 Now it can reasonably be asked why you need a backup cam for such a small car, especially if the top is down. Well, first, the top isn't always down, and the rear visibility with the top up isn't great. Second, even with the top down, the backup cam lets you see things that are otherwise obscured. Especially at curb level. Like, for example, the curb itself. When parallel parking, I appreciate the additional information, which should reduce the risk of curb rash when I mess up the entry.

Fortunately, you can self-install the exact camera that came as standard equipment in Japan in 2016-2018 MX-5s. The OEM camera and wiring harness are available from Rev-9 or Amayama (wiring, camera). Once installed, the camera video immediately appears on the dash display when you shift into reverse and the on-screen guide lines are properly scaled. In other words, it works as though it was there from the factory (something that can't be said for some cheaper after-market options).

The install process is very well documented on the Miata.net forums (see here). Still, it took me about 7.5 hours to get it done. The cutting of the bumper and styrofoam behind it filled the bulk of that time. The styrofoam, in particular, is a bear to cut out. I had the best luck with a wood boring bit on a 12v drill, followed with hacking away with a pruning saw blade. But totally worth it, in the end.

PS I wish I'd done this install at the same time as the CarPlay/AndroidAuto module install -- you basically have to do the same interior disassembly for both, so it would have saved a couple hours of redundant work if I'd done them at the same time.
ND