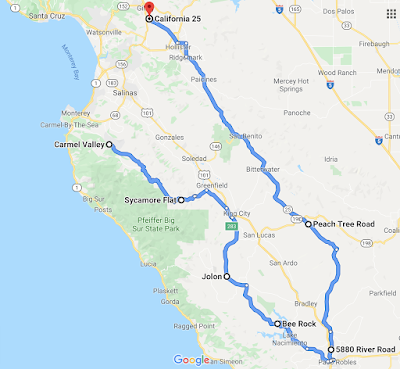 There they are. The best driving roads I've ever experienced. Miata-perfect. Coastal California gets all the attention, but it's really inland central California where the best Miata roads are.

From Carmel Valley to Paso Robles, and then from Paso Robles up to Gilroy. Glorious. Mostly through hilly ranch land, with a military base thrown in. Virtually no traffic at all (well, other than in Paso Robles itself). A great mix of tight corners and long sweeping curves. Mostly two-lane, but some single lane stuff thrown in for variety. Altogether, this is 237 miles that takes just over 5 hours. Other than Carmel Valley, Paso Robles, and Gilroy, there are few services available, so plan accordingly for your gas and bladder needs.

Carmel Valley to Paso Robles (this is basically G16 and G14):


Paso Robles to Gilroy (this is mostly Hwy 25):


I've never driven this entire circuit in one day, since I also generally have to include the hours getting from SF to Carmel Valley, and returning from Gilroy to SF. But I did recently get to drive it on two separate days as part of a 637-mile weekend trip to the Santa Ynez Valley wine country. Perfect weather helped.
ND