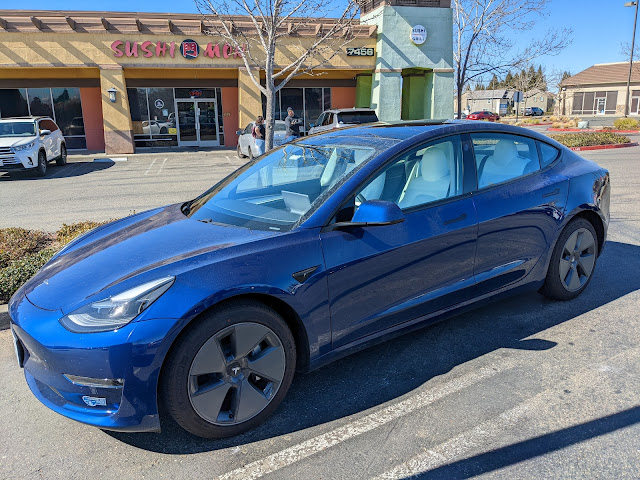 Thanks to the kindness of a friend, I was able to take this 2021 Tesla Model 3 Long Range for a 240 mile drive, almost entirely on the highways to and from Roseville. This is my second car borrowed for this four-hour drive (the first being a 2013 Porsche Panamera GTS).

Overall verdict? The Tesla 3 is a great car, and I enjoyed my time with it. It feels like the future; it makes everything else feel dated by comparison.

But I'm going to start with the two reasons it's not for me.

First, the driver's footwell is just a tiny bit too narrow on the left side. Yes, I know, that's a weird complaint, but after two hours, my left knee was complaining because my foot couldn't turn out as much as it likes. These are the idiosyncratic things you only figure out when you've had some time in a vehicle.

Second, the rear blind spots are surprisingly big, such that I never got fully comfortable changing lanes (especially after dark). Like many modern cars, the C pillars in the Model 3 are BIG. In addition, the rear deck is surprisingly high, constricting your rear-view mirror visibility. So the "glance over your shoulder" approach doesn't fully apprise you of what's out there. Moreover, the combination of big C pillars and high rear deck meant that I couldn't adjust the mirrors to cover the entire blind spot. And in a surprising move for such an advanced car, there are no blind spot warning lights in the wing mirrors (and I didn't find any option for an audible warning, either). Instead, Tesla wants you to glance at the central screen, which uses rear-facing cameras to show you surrounding traffic (and even colors in red any cars in your blind spots). This strikes me as a bad UI -- I don't need another thing to check (in addition rear-view and wing mirrors) before I can change lanes. (The rear visibility issues were in contrast to the forward visibility, which is fantastic, thanks to the sloping hood.)

OK, now on to the considerable list of good things.

I know it's polarizing, but I love the minimalist design aesthetic. No gauge cluster, no vents, no knobs to break up the sweep of the dash. Subtle multi-function buttons on the steering wheel. Tesla had to economize on interior materials to hit their price point on this car, and I think their decision to embrace Scandinavian minimalism is a brilliant way to make those cost savings not only invisible, but a perk. And the giant central touch screen feels like modern luxury. Yes, digging through the menus can be a bit much, but usually you don't need to. The stuff you want is right there -- climate controls, for example.

And the software is great. The whole user interface experience reminded me of an Apple product -- things just worked the way you intuitively would expect them to. A single pull of the window controls rolls them up completely (a feature that's common in other cars for driver's windows, but not the others?!). The steering wheel controls do what you would expect them to do, depending on the context (they adjust the stereo volume in regular driving, but they adjust the wing mirrors when that function is selected on the central screen).

Even the navigation is great. For the first time ever in a car, I didn't miss Google Maps. The voice recognition works well for navigation input, and the giant screen makes the default overhead view useful in a way it can't be on a smaller screen.

And THE POWER. The power is amazing. Yes, we all know that EVs have a huge torque advantage over combustion powered cars. But the immediacy of the power delivery is a revelation. The car is like a rabbit -- it just leaps ahead whenever you lean on the accelerator. My Porsche 911 Turbo had the same "pin you to your seat" feeling, but it was like a big cat -- it needed to gather itself for a moment before springing. Not the Tesla. 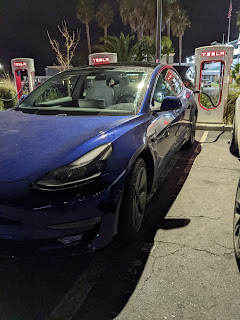 I also really liked "one pedal driving" with the regenerative braking engaged. After a few minutes, the whole thing was very intuitive, and I adjusted my deceleration tactics to avoid touching the brakes.

But range anxiety is real. I started the day at nearly 80% charge, which suggested a bit less than 300 miles of range. My drive was going to be 240 miles. No problem, right? Um, not once the temperatures starting falling in the evening. By the time I set the nav for the trip home, it was already telling me that there wasn't enough juice left. Fortunately, Tesla's nav system automatically found the best supercharger along the route (impressive!). So I had the full EV experience -- including an unscheduled 20 minute stop at a Tesla supercharger in Fairfield.

Finally, let's talk stereo. The Model 3 deluxe 10-speaker stereo package (standard for long range and performance package cars) is very good. In its flat settings, I thought it was a tiny bit on the bright side. But after nudging the EQ settings a bit, and setting the "immersive" feature to "Standard" and "Auto", it was largely on target.  I used the built-in TIDAL app, as well as Bluetooth from my phone, which both sounded equally good. 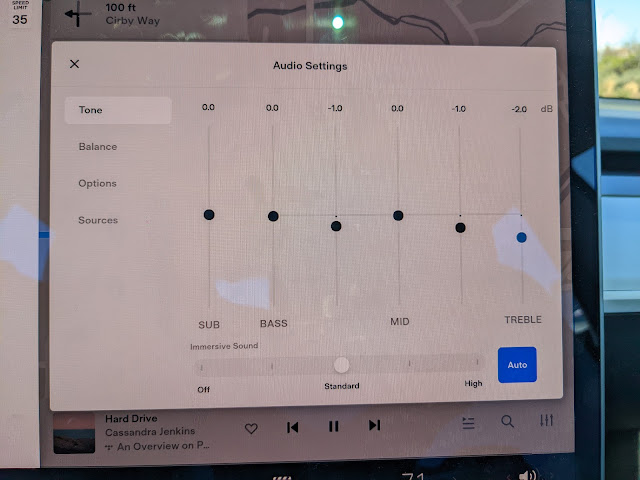 In the end, however, I still preferred the Bose system in the Porsche Panamera. The real limiting factor for the stereo in the Model 3 is the relatively high ambient interior wind and road noise. Oh, it's still a LOT quieter than my Mazda Miata, but it's not nearly as isolated as the Panamera experience. Again, I suspect this was a deliberate choice by Tesla, camouflaging the need to keep costs down by orienting the car more to a BMW "driving should keep you in touch with the road" rather than a Mercedes "driving should feel like your quiet living room" experience.