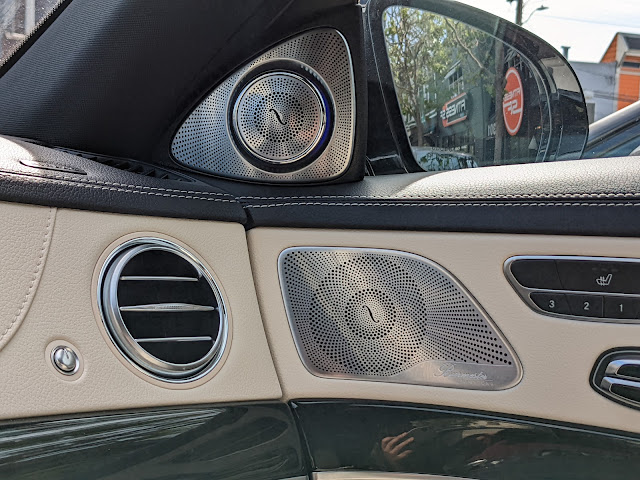 One major reason that I chose this particular S550 was its having the Burmester High End 3D Surrounded Sound System. That option added $6,400 to the sticker price when this car was new in 2015.

I've always been curious what the very best modern OEM car audio systems sound like, and this system has a decent claim to being among that number. (Mercedes has further upgraded this system in the latest S class model years, adding in-seat "exciters" and naturally calling it the Burmester High End 4D Surround Sound System. I am not joking.)

What does that $6,400 get you? Well, you go from 13 speakers to 24, jump from 590 watts of combined amplifier power to 1540 watts, and gain a trunk-mounted subwoofer. Presumably, you also get a bunch of bespoke digital signal processing (DSP). The most obvious visible give-away of the upgraded High-End option is the extra tweeters mounted in the front doors. For extra bling factor, these tweeters rotate out of their housings when the car is turned on and have their own LED lighting. Ah, yes, S Class. You also get the subtle, etched "High End" engraved on the bling-y speaker grilles. 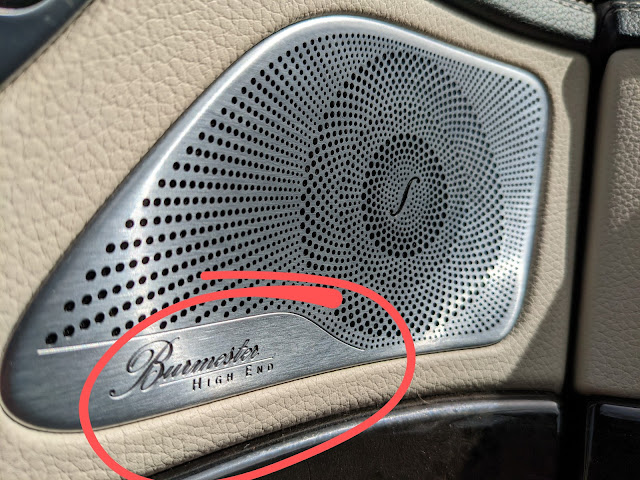 So, aside from all these speakers and visual bling, what's it sound like? In a word (and a parenthetical): amazing (for a car). This is, without question, the best automotive sound I've ever experienced. To be fair, that's not a high bar for the cars I've owned, but it also bests the excellent systems I've recently heard in the Tesla Model 3 and Porsche Panamera loaned to me by friends.

What makes it so good? Well, this is the first car where I've been equally interested in listening to quiet music (string quartets, small combo jazz) as louder music. Also, it's the first time "audiophile" words like soundstage and instrument separation and tonal color seem like relevant things to talk about. I've never before thought "I could deeply and critically listen here" in a car.

Why is it so good? Four reasons, I think. First, the cabin is so quiet. This probably makes the most difference -- you can't really preserve low level musical information if it's drowned out by road noise. And the S Class famously isolates you from that (of course, you get the quiet even if you don't option the "High End 3D Surround System"). Second, the "VIP" sound mode, which deploys a bunch of DSP to optimize the sound for one seat (you can pick any of the four seats!). When engaged, the musical presentation suddenly snaps into focus right in front of you, as if you're sitting in the sweet spot in a home stereo system. It's very impressive and a bit eerie. Third,  the subwoofer. Unlike the trunk boomers you hear rocking the block, this one is subtle, adding body and heft, without calling attention to itself. 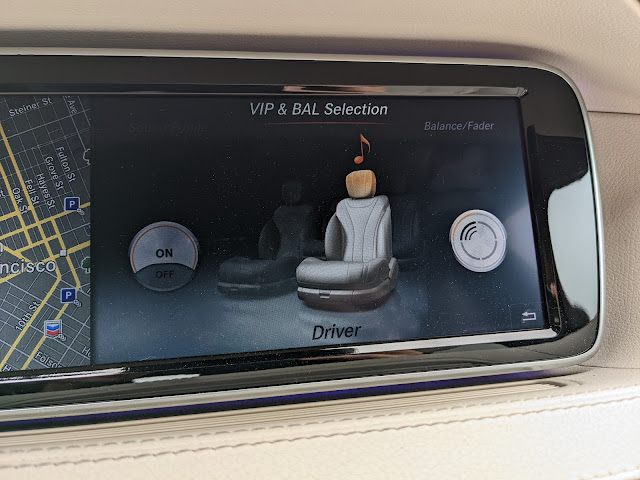 But the parenthetical also applies: this is great sound, for car audio. For $6,400, I think I could assemble a better sounding home stereo system. Compared to a system like that, the Burmester 3D sounds a bit grainier in the highs, and offers less snap in the bass. In the end, I generally prefer the "3D Sound" profile and set the tone controls to slightly decrease both treble and bass. And, of course, VIP mode set to optimize for the driver's seat. 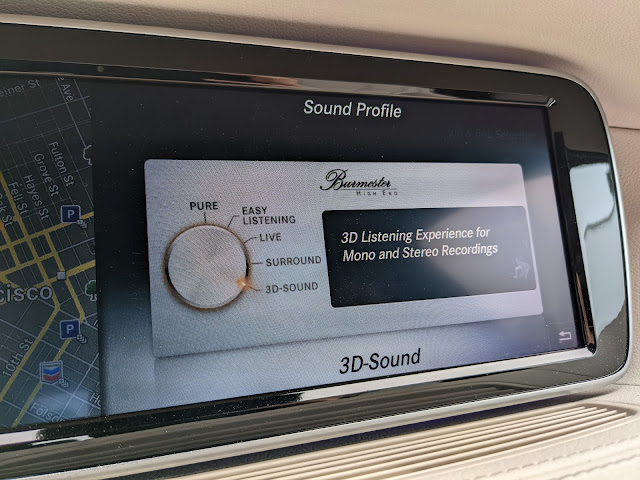 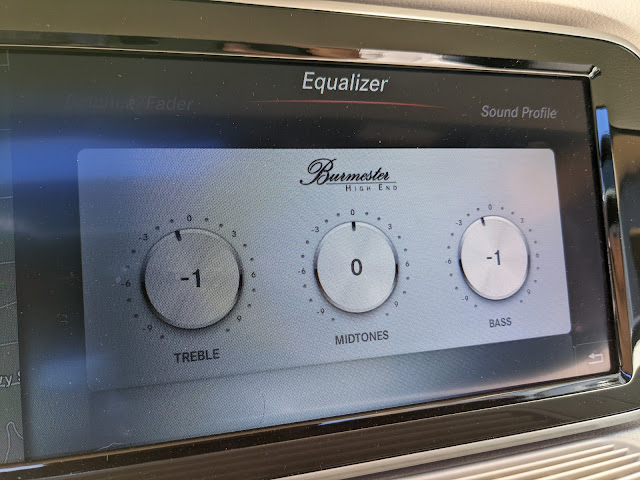