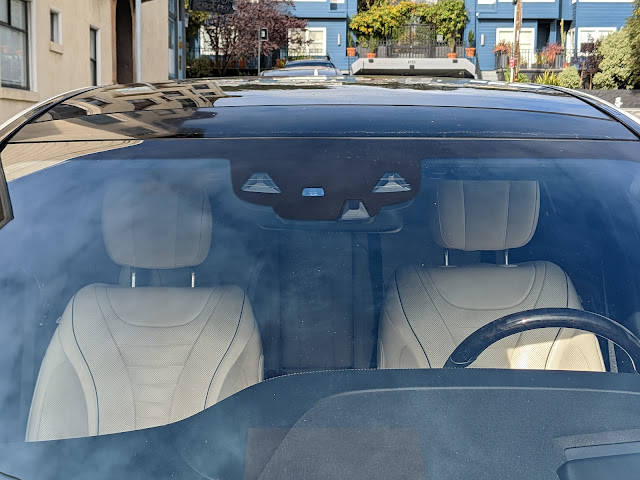 The S Class has long offered an electronically controlled hydropneumatic suspension known as "Active Body Control" (aka ABC). The problem that this system is intended to solve is how to deliver a soft ride, but also minimize body roll ("wallowing") when taking a corner.

In typical Mercedes fashion, they threw an enormous amount of cutting-edge technology at the problem, and debuted the system in the S Class. Here's the high level technical description, courtesy of Wikipedia:

In the ABC system, a computer detects body movement from sensors located throughout the vehicle, and controls the action of the active suspension with the use of hydraulic servomechanisms. The hydraulic pressure to the servos is supplied by a high pressure radial piston hydraulic pump, operating at 3,000psi. Accumulators regulate the hydraulic pressure, by means of an enclosed nitrogen bubble separated from the hydraulic fluid by a membrane.

My S550 also has the "Magic Body Control" option ($4,450), which enhances the ABC system with forward-facing cameras that watch the road ahead and preemptively adjust the suspension in response to approaching road conditions. According to Mercedes:

This magical system uses two small cameras behind the windshield of your car in order to can the road that is ahead of the vehicle. This is called the ROAD SURFACE SCAN. This scans up to 15 meters in front of your car as it is driving down the road, and measures the height of the dips and bumps that the road has. Then, the suspension uses the active hydraulics in order to compensate for the bumps in the road. This works up to a speed of 130 km/h, or about 80 miles per hour. This ability to somewhat ‘predict’ the dips in the road through a camera enables the vehicle to have a much smoother ride than that of a normal vehicle.

(Let me also recommend this Mercedes ad, illustrating the concept with disco chickens.)

Does the ABC system work? Yes. The car manages to simultaneously offer a very soft ride and also display very little body roll while cornering or braking. How much does the "Magic Body Control" system add? Hard to tell (but see what Car & Driver had to say). You can defeat the MBC camera predictive system by putting the suspension in "Sport" mode, but I hardly ever do that, and I definitely haven't tried to drive over the same bumps in both modes as an A/B test.