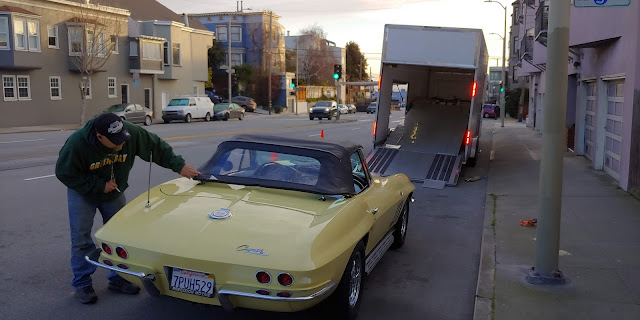 The Corvette is now off to its new owner in Arizona. That means that it's time, once again, to tally up the cost of ownership for this little "one year, interesting car, fully depreciated" experiment. Except, as those of you who are paying attention will notice, I kept this interesting car for just over 3 years. I'm not exactly sure how that happened, but I liked it and it took a while to sell (including a failed effort on Bring A Trailer that didn't meet reserve). Before I knew it, 3 years had gone by...

From a cost of ownership point of view, it's interesting to contrast this experience with the Porsche 911 Turbo that preceded it. As with that car, the main expense here was maintenance. With a 50+ year old car, maintenance is always going to be an issue. (Hell, it's the same with me, now that I'm over 50.) But, unlike the Porsche, there was also some significant depreciation here. That was probably due to a combination of (a) my having overpaid at purchase in order to get the color and engine combination that I wanted and (b) the market for classic Corvettes weakening over the past three years. With the Porsche, I caught the prevailing winds going the opposite direction on both of those factors. So it goes.

So that ended up being a bit cheaper than the Porsche on an annualized basis (that one was ~$8,900/yr), but still a whole lot of money. I'm still glad I bought it, since owning a C2 Corvette was a bucket list item, now checked off. The only way it would have been significantly cheaper is if the overall market for these cars had stayed strong (no way to predict that) and if I'd deferred nonessential maintenance (like not replacing the heater core or redoing the parking brake, neither of which was essential, but both of which were things that I'm glad I did to make the car better than how I found it).

Another way to look at this is using my alternative benchmark: what if, at the outset of my "interesting car, one year, fully depreciated" experiment, I had instead bought the 2015 Honda Odyssey EX-L minivan (a sensible family new car choice)? Well, from 2016-2019, that car would have depreciated $12,300, according to Kelly Blue Book. In other words, the cost of ownership would have been just over $4,000, making the Corvette roughly $3,500 more per year to own.

That's significant money, to be sure, working out to about $10/day in incremental additional spend. And once you consider how infrequently I drove the Corvette, perhaps I would have been better off directing that money toward renting interesting cars on Turo? Well, that's for others to consider, now that I've ended the experiment early by buying a Miata.